"Natural building" is an umbrella term than connotes any sort of building that is accomplished with the use of natural materials primarily, as opposed to the use of man-made or industrial materials. The objective is to build with simple techniques that don't further pollute the environment, consume more fossil fuel, or unnecessarily extract the resources of Mother Earth. Such techniques, by their very nature, have an aesthetic value that tends to blend in with the environment and "feel" natural. 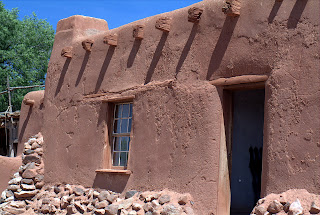 Adobe is one of the oldest building materials in use. It is basically just dirt that has been moistened with water, sometimes with chopped straw or other fibers added for strength, and then allowed to dry in the desired shape. Commonly adobe is shaped into uniform blocks that can be stacked like bricks to form walls, but it can also be simply piled up over time to create a structure. The best adobe soil will have between 15% and 30% clay in it to bind the material together, with the rest being mostly sand or larger aggregate. Too much clay will shrink and crack excessively; too little will allow fragmentation. Sometimes adobe is stabilized with a small amount of cement or asphalt emulsion added to keep it intact where it will be subject to excessive weather. Adobe blocks can be formed either by pouring it into molds and allowing it to dry, or it can pressed into blocks with a hydraulic or leverage press. Adobe can also be used for floors that have resilience and beauty, colored with a thin slip of clay and polished with natural oil.

Adobe is a good thermal mass material, holding heat and cool well. It does not insulate very well, so walls made of adobe need some means of providing insulation to maintain comfort in the building. Sometimes this is accomplished by creating a double wall, with an air space, or some other insulation in between. Another approach is placing insulating materials on the outside. 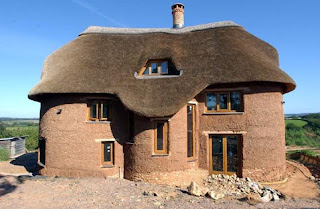 Cob is a very old method of building with earth and straw or other fibers. It is quite similar to adobe in that the basic mix of clay and sand is the same, but it usually has a higher percentage of long straw fibers mixed in. Cob is normally applied by hand in large gobs (or cobs).

Because of all the straw, cob can be slightly more insulating than adobe, but it still would not make a very comfortable house in a climate of extreme temperatures.

A variant of cob is what is commonly called "light straw/clay". This is made with the same long fibers of straw which is tossed like spagetti with a sauce of clay slip. The idea is to coat the straw fibers with enough of the clay to get them to stick together, but not so much that it makes a gummy clump. This material is then tamped into a form and left to set up enough to remove the form. Light straw walls could be useful for interior partitions and even exterior walls if it is thick enough. Such walls would be quite a bit more insulating than cob, but they require a timber frame of some sort because the straw itself would not be load bearing. 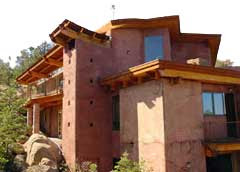 Poured earth is similar to ordinary concrete, in that it is mixed and formed like concrete and uses Portland cement as a binder. Instead of the sand/gravel used as an aggregate in concrete, poured earth uses ordinary soil. Little to no maintenance is required of poured earth walls, since they have a high resistance to the deteriorating effects of water and sun. Ideal soil is basically low in clay.

Since poured earth is similar to concrete, local suppliers can provide the product which can then be pumped using traditional concrete pump trucks. Standard concrete forms can be used in preparation for the pour.

It is possible to incorporate rigid insulation within a poured earth wall, so that there is a thermal break between the exterior and the interior, thus allowing the interior portion of the wall to serve as appropriate thermal mass for the building. 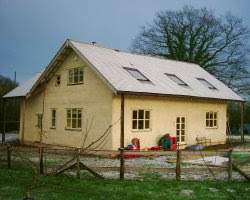 Straw is a renewable resource that acts as excellent insulation and is fairly easy to build with. Care must be taken to assure that the straw is kept dry, or it will eventually rot. For this reason it is generally best to allow a strawbale wall to remain breathable; any moisture barrier will invite condensation to collect and undermine the structure. Other possible concerns with strawbale walls are infestation of rodents or insects, so the skin on the straw should resist these critters.

There are two major categories of building with strawbales: load-bearing and non-load bearing. A post and beam framework that supports the basic structure of the building, with the bales of straw used as infill, is the most common non-load bearing approach. Care must be taken to consider the possible settling of the strawbales as the weight of the roof, etc. compresses them.

Erecting bale walls can go amazingly quickly, and does not take a lot of skill, but then the rest of the creation of the building is similar to any other wood framed house. The result is often worth it, because of the superior insulation and wall depth that is achieved. 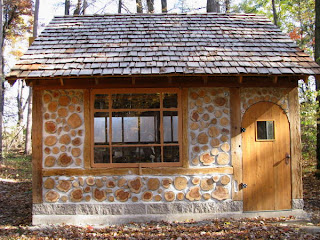 Cordwood construction utilizes short, round pieces of wood, similar to what would normally be considered firewood. For this reason this method of building can be very resource efficient, since it makes use of wood that might not have much other value. Cordwood building can also create a wall that has both properties of insulation and thermal mass. The mass comes from the masonry mortar that is used to cement the logs together, and the insulation comes from the wood itself and the central cavity between the inside and outside mortars.

This method produces a look that is both rustic and beautiful. The process of building is similar to laying rocks in mortar, where the the logs are aligned with their ends sticking out to create the surface of the wall and mortar is applied adjacent to each end of the log. Typically the logs are not coated with a moisture barrier, but are allowed to breath naturally. It is possible to include other materials into the matrix, such as bottle ends that would provide light to enter the wall. 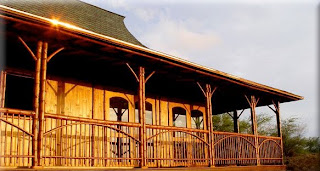 Bamboo is one of the most amazingly versatile and sustainable building materials available. It grows remarkably fast and in a wide range of climates. It is exceedingly strong for its weight and can be used both structurally and as a finish material. The canes are beautiful when exposed and they can be cut in such a way as to be re-combined into useful products such as flooring.

There is a long vernacular tradition to the use of bamboo in structures in many parts of the world, especially in more tropical climates, where it grows into larger diameter canes. 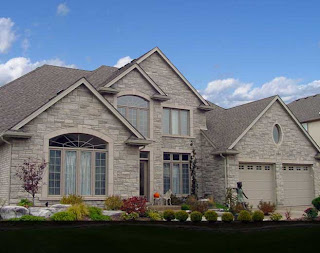 Building with rock dates back to the beginning of human history. Many cultures have left durable evidence of their fine craftsmanship with stone masonry.

Rocks are infinitely variable in shape, color, texture, hardness, etc.There is definitely an art to laying stones, one that can be learned by studying, watching or doing. One basic tenet is to overlap the rocks as much as possible, as one would do with laying bricks. This creates a strong wall that resists cracking along weak seam lines. Another good practice is to keep the very largest rocks toward the bottom of the structure. Every rock mason has his individual style, almost a signature.

Rocks are particularly suitable in areas where thermal mass is desired, since they can hold their temperature very well. This means that rock walls in the interior of a building, especially where they will be struck by sunlight, can serve to store heat or moderate temperature fluctuations. If used as an exterior wall, rocks should be insulated from the inside to keep them from bleeding heat or cold in either direction.